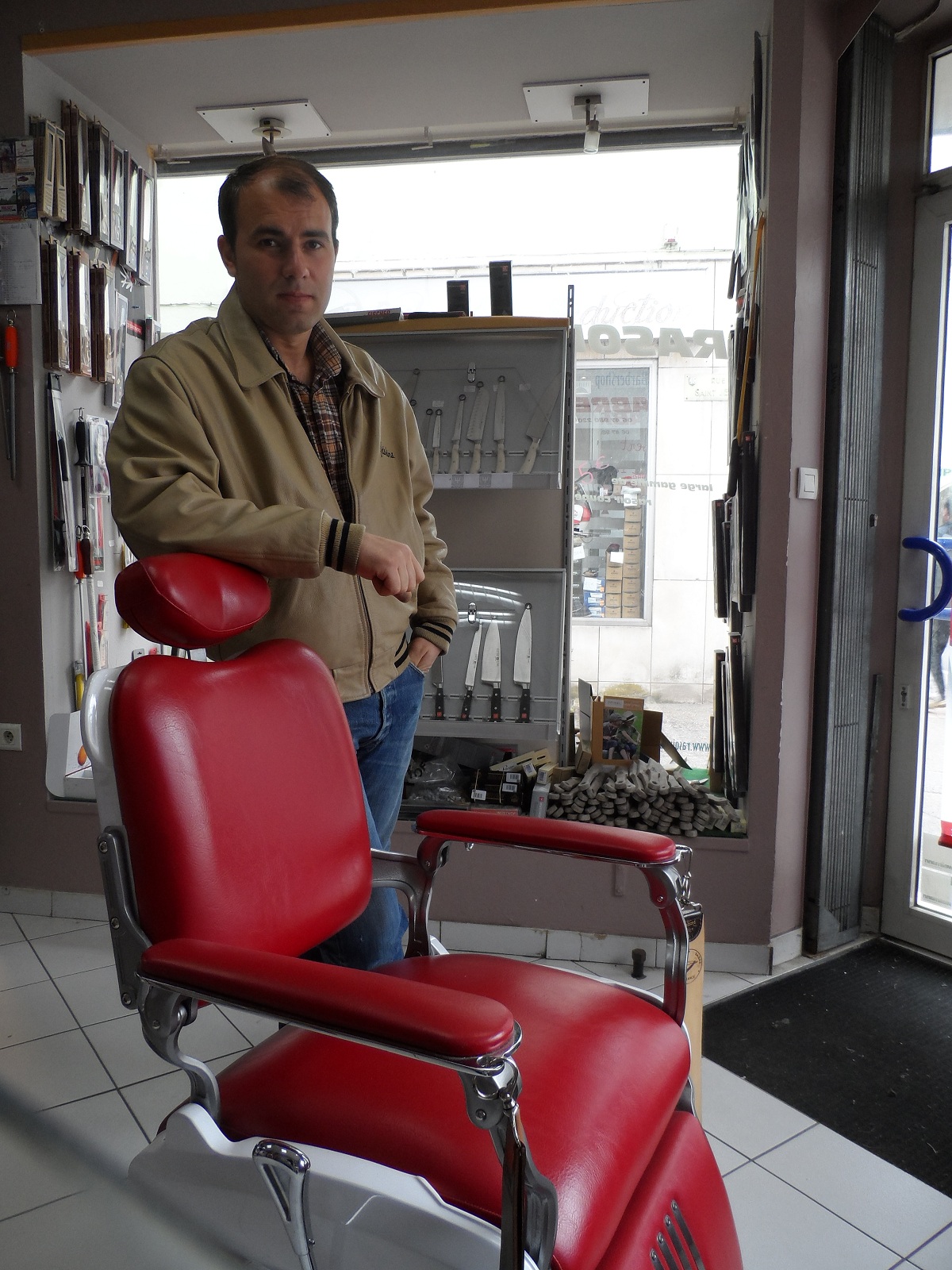 My investment in this passion is complete and I live my passion today thanks to many people who trust in me and give me  their razors to resharp and do know my expertise in this area.

I started to shave with straight razor in 2001 when I was angry against my cartridge razor witch did not fit my beard and didn't succed to give me satisfaction when I was shaving.

My starting point was an old shop in Istanbul (Turkey) where I was been given first razor knife (Filarmonica 5/8) and first lessons from my barber friends. I kept on to try to get more informations and lessons throught the street of Stamboul , Adapazari , Bursa (...) and back to France in Reims.

The evolution of a strictly personal practice to a professional activity is also made with new material needs and other methods that allow a faster and more efficient work, and these methods still evolving ....

The visit of different production site specially last razor manufacturers has also allowed me to watch the whole process of manufacturing blades and thus a better understanding of the final result.

These Wednesday 19 and Thursday, March 20, 2014 vI have been visiting the last different razor manufacturers in Germany Solingen intead to completed my knowledge and I met different master of  razor grinder.

First I want to thank Kronenberg family who runs the business of Revisor GmbH, say thank you for their sympathy for their  warm welcoming and their time they have allowed me for consulting the archives of the Solingen city. 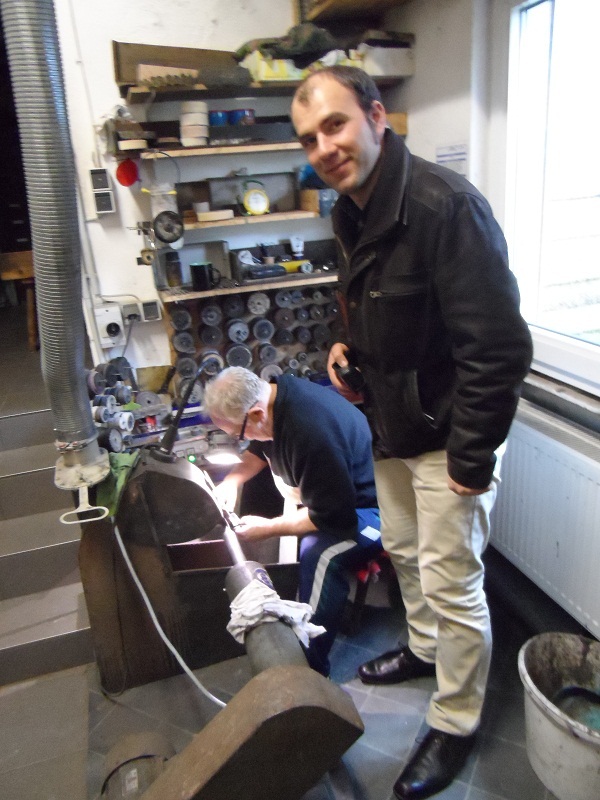 Myself near a grindmaster in Revisor GmBh

The company is being today handcrafted razors from old and new blade blanks. The steel used in Revisor is from new generation and very developed with carbon 115 blades with a hardness of 58-64 Hrc.

These razors are marketed only by Revisor and are first choice.

The second place was  DOVO SOLINGEN the world bigest razor manufacturer. My favorite interlocutors Mr Zeitvogel  and Mrs Rothstein made me discover again the factory workshop after workshop ... Manufacturing straight razor requires a highly skilled labor because all the work remains largely manual. 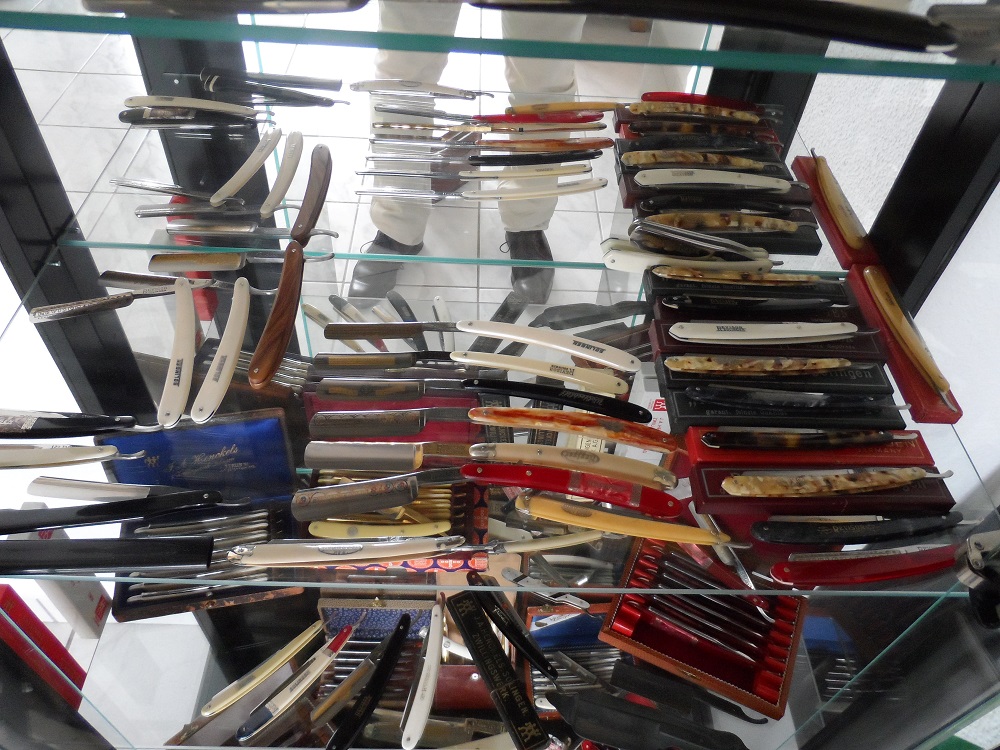 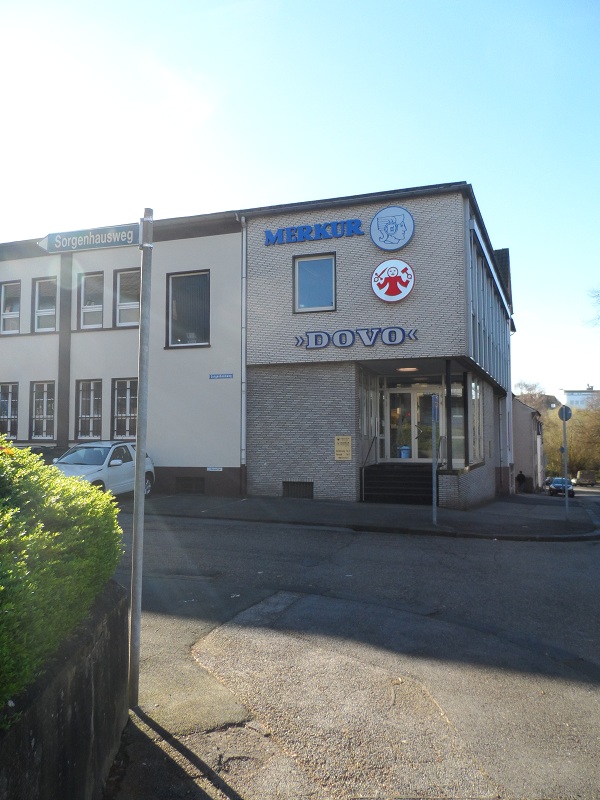 myself with Mme Rothstein.

German production remains pragmatic, although some luxurious pieces with fine wood scales for example, DOVO keep on its way with same aim as before and make quality cutting tools and a simple sleek finish.

Besides the open razor production DOVO  have a multitude of cutting tools turned to manicure, pedicure, hairdressing scissors and not forgetting the safety razor with its MERKUR branch.

A great thanks  to Mme Rothstein and Mr Zeitvogel for their sympathy and their explanations!

Mr Heribert Wacker master of grinding at Dorko factory  spent  his retirement to serve in different open razor factories like BOKER, DOVO etc, until he made his own blades. At this time the production has slowed to some personal reasons and his son is now keeping on the work of his expert father.

I should received some pieces from WACKER later...

Appeared two years ago on the market Mr. Aust makes me ask many questions about the origin of his connection to the world of straight razor. The quality of his work didn't make place to any hazardous fact but showed expert hands behind each piece. Everything became clear when I have asked him how did he come into this buisness. Mr Aust is simply the son of a master of  razor grinder who worked for the company Friedrich.ERN Solingen-Wald  recognized as the bigest German firm of open razor.